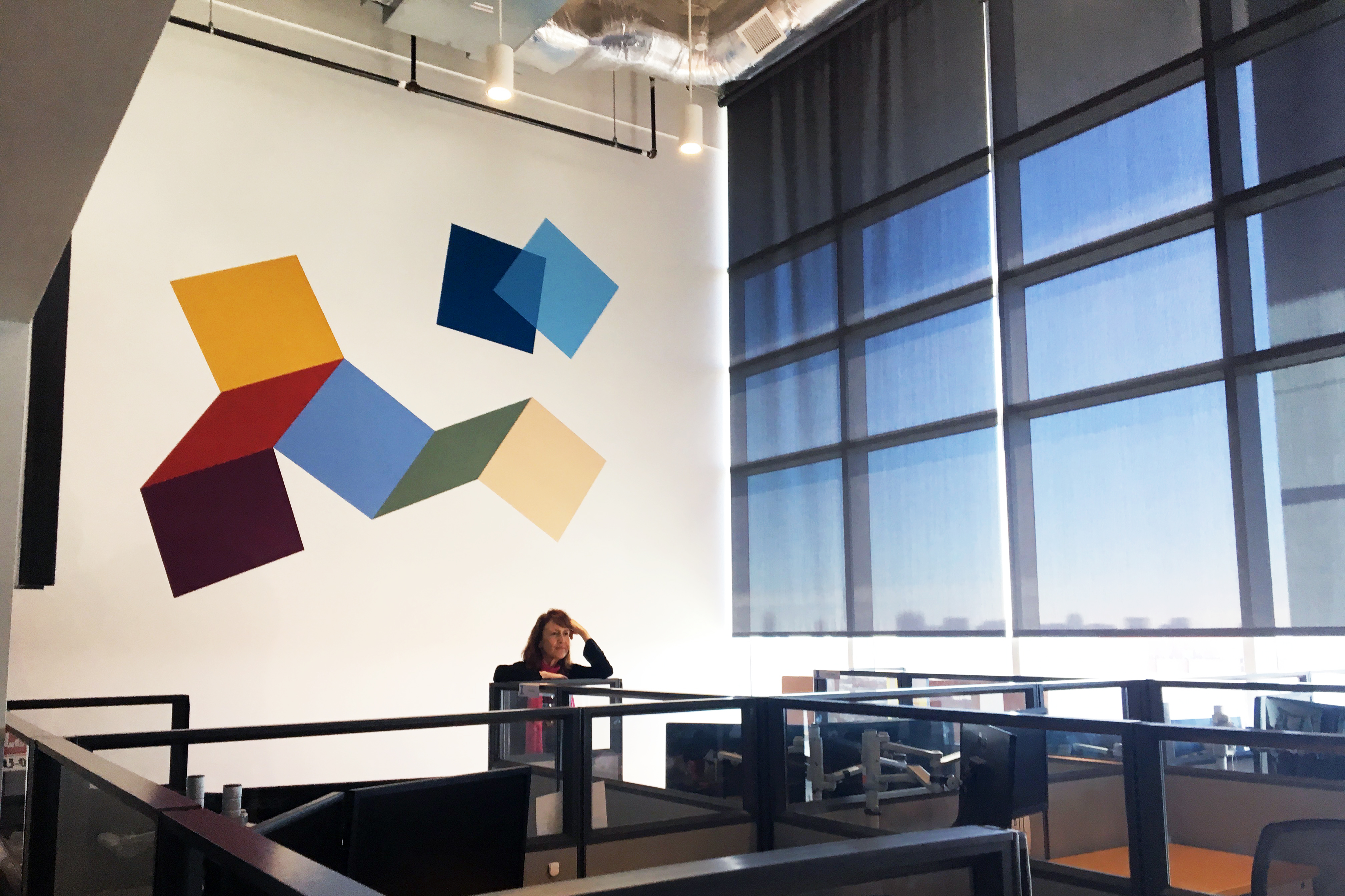 KAC: The painting commissioned for Johnson Law Group is part of a larger body of work. What was the catalyst for this series of forms and have they always been a part of your visual dialogue?

ML: The image for this commission originated from several drawings based on mosaics. The idea was to scale up the tessellation to a monumental scale for the architectural space.  Last year I took a trip to Morocco and stopped in the historical ruins of an old Roman town. 2000 years later the mosaics were virtually intact, and the geometry is still universal. I made a series of works based on those patterns but exploded the rigid predictability so that the motifs began floating in space. I then integrated the idea of perceptual ambiguity so that depending on where you stand, the elements of the piece appear at once to come forward or recede to invisible vanishing points. Much of my work plays on perceptual ambiguity. 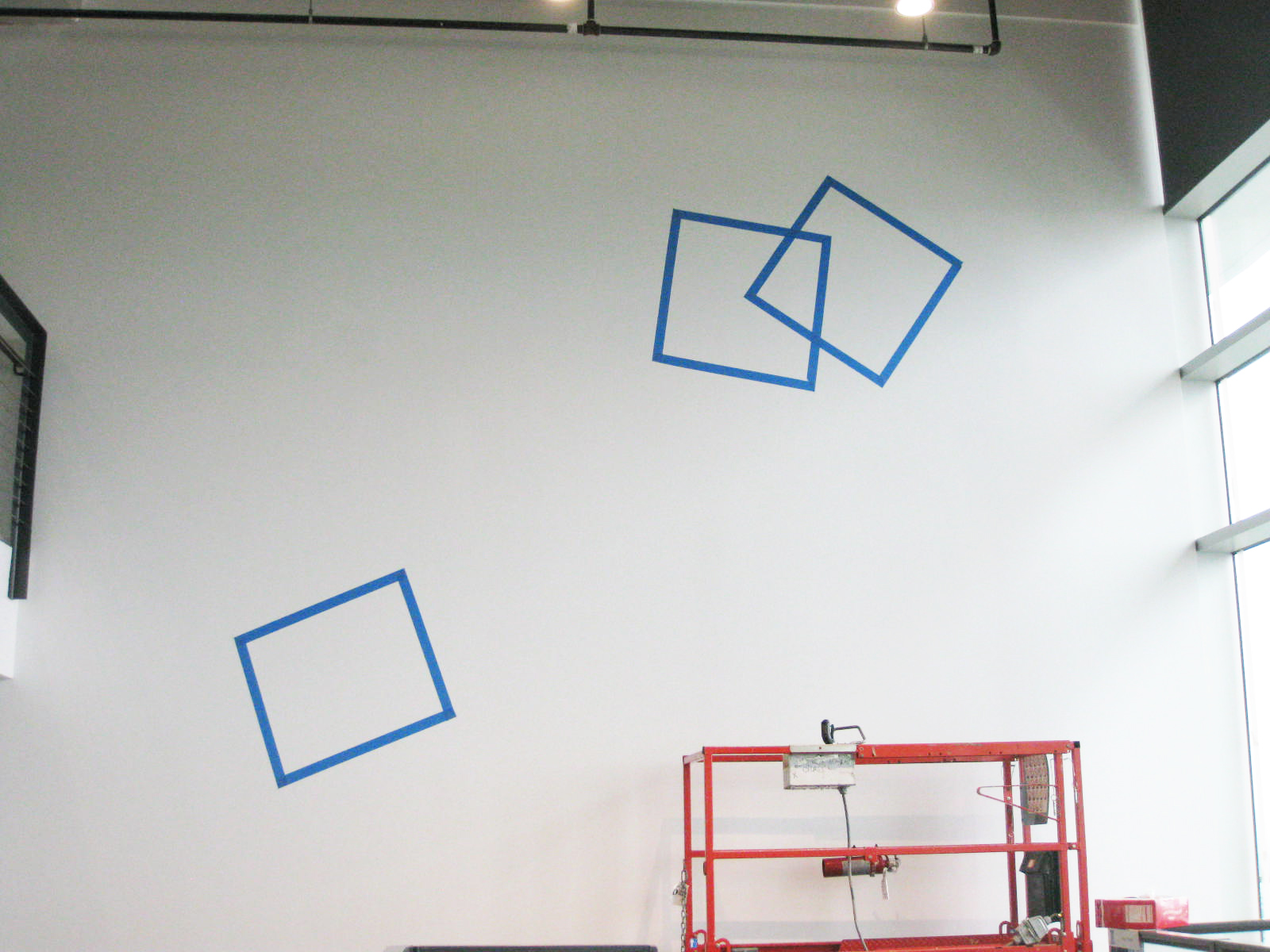 KAC: This painting is much more complex than meets the eye and the completed work will be the result of multiple steps and extreme attention to detail. Will you please describe the process that goes into a wall painting like this?

ML: As with all of my paintings, the preparation sketch is a small pencil drawing on graph paper. From these I select a specific configuration to further develop. Color, however, is never planned in advance. In the case of a mural, I create a more detailed sketch and envision several color schemes that can change at the last minute. For this project, I wrote software code to create a computer representation and refine the color selection. I work with an engineer who takes my program and generates what looks like pages of numbers but is actually a series of mathematical equations to generate coordinates that allow us to modify or laser plot the image in the correct scale onsite. 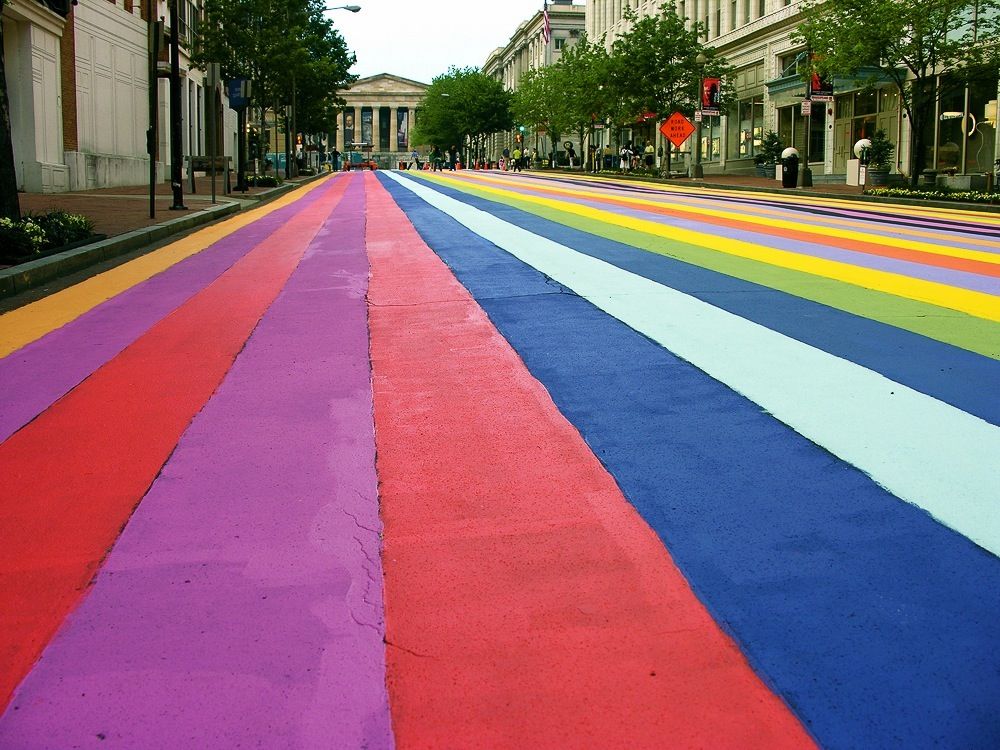 KAC: What is the largest painting you've completed to date?

ML: In 2007 I was commissioned by the Washington DC Commission on the Arts and Humanities to create a 450’ x 50’ street painting on 8th St NW. It was part of a citywide Color School revival.  I called it Gene’s Jubilee as a nod to Gene Davis, a Washington Color School painter. I worked as his studio assistant for 4 years and when he died suddenly, I was asked to design the first street painting below the National Museum of American Art where his memorial exhibition was. That was in 1987 then I reprised a different color scheme for the 2007 painting.  You had to be on a rooftop or in a helicopter to see the whole thing. 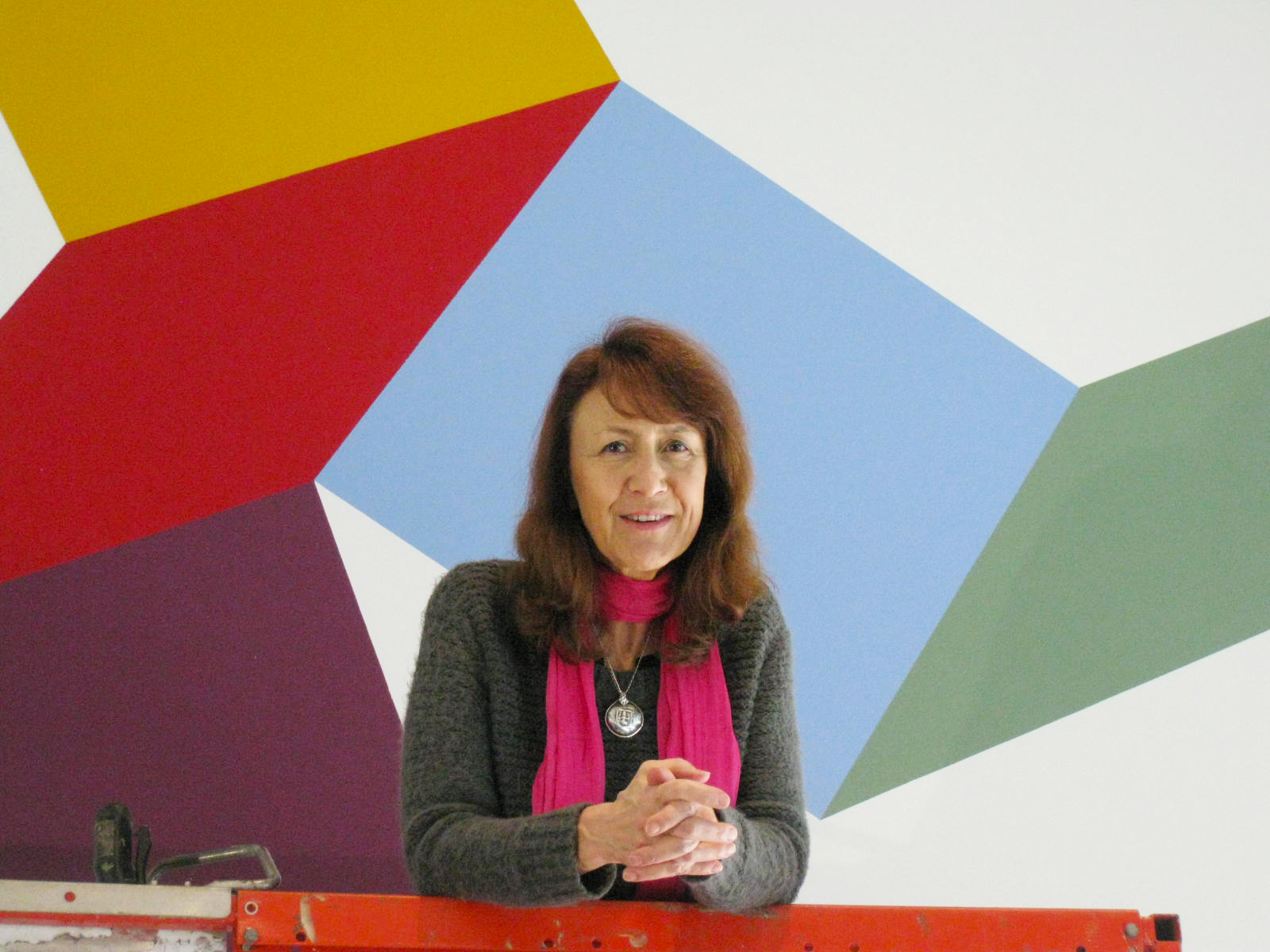 KAC: You've stated that you gather creative material from your travels. Are you gathering ethereal data such as light, awareness and emotion or physical data like architectural shapes and design form and color? How do you document your discoveries?

ML: I have moved around my whole life. Travel is lifeblood; it connects the planet. Humans are not so different worldwide but their cultures and creations are.  Every place I visit gives me ideas, whether it is an exotic land or my own back yard. I try to note them in my notebook every morning. They become a kind of library to draw from. I may be interested in the obscure historical use of red in India vs. Japan, or the plain shadows cast on a corrugated shelter in Africa.  Light sources are tremendously important in my work, going back to my early years growing up near the Sahara. Ultimately what I paint is the sense of place, real or imagined. 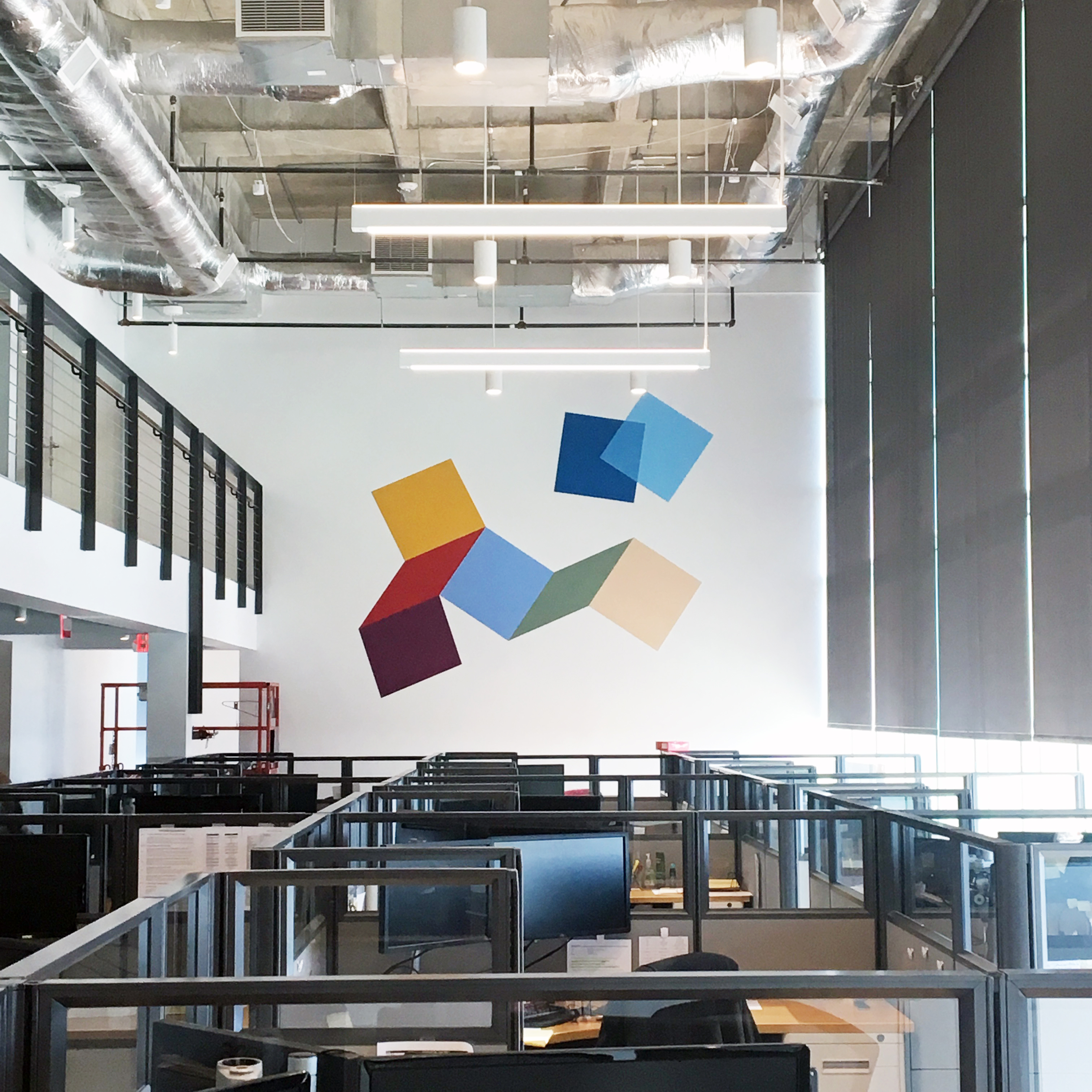 KAC: Will you speak to how your secondary role as a simultaneous French interpreter informs your work and provides balance in your life as an artist?

ML: I’ve been fortunate to have a skill, which allowed me to work as another kind of bridge builder around the world. As a simultaneous interpreter, I am engaged in quasi performance art.  In art you often work alone but in language you are compelled to interact with the world and those in it. I greatly value my privacy as an artist, but I never wanted to spend my life in studio isolation. It’s important to live in your time, experience it, and strive to understand it.

KAC: What might we find in the corner of your studio?